Here you go... my shining moment in the qualifying heats for Hell Yes Sprints a couple of weeks ago. I'm on the far bike (tan shirt), but you can measure my progress by watching the screen behind the riders. I'm the blue bar. After triumphantly pedaling my legs off for 25ish seconds, the smoke at the Blind Pig ate away at the core of my being and I fled. That victory would have to go unclaimed...
Posted by Zoe the Wonder Dog at Wednesday, March 25, 2009 No comments: 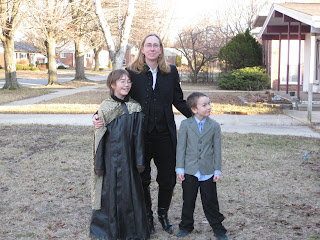 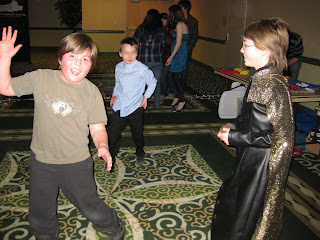 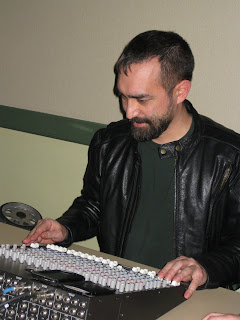 There have been some projects building up around here for awhile that need some attention and, for one reason or another, I could use some help. 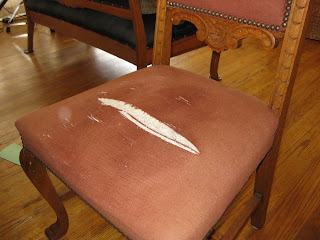 1. Upholstery. I have two of these chairs and they both look like this. I've reupholstered dining room chair seats that only require one to stretch the fabric across the seat and then staple gun it on the back. These chairs, however, have tacks around the edges and more serious corners and I have no idea what I'm doing. 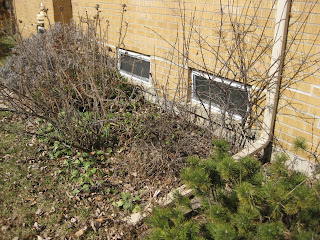 2. A garden. Despite my usual proclamations that I grow nothing but grass, I would like to put in a food-producing garden this year and this is my sunny spot. The problem is that this very overgrown bed is also where I picked up poison ivy two summers ago. Apparently, I am very allergic to poison ivy. Since the oil remains on the plant even after it goes dormant, I basically just abandoned this bed. It is time to reclaim it, but I'm hesitant (er, terrified?) to deal with the poison ivy (yes, it was that bad... two emergency room visits and over a month to heal). 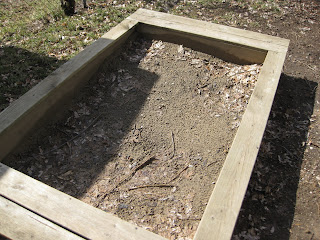 3. Sand. My dad built this large sandbox the first full summer we lived in this house (2002). I borrowed a friend's little pick up and had it loaded with an obnoxious amount of sand. The truck was barely up to the job, but we managed to get the box filled. Seven years later, however, the box is badly in need of a refill, only my friend sold his truck.

4. Lawnmower. Someone who shall remain nameless tried to mow huge piles of leaves last fall and the fuel line now seems to be clogged. I've changed the oil, replaced the spark plug, had the blade sharpened, and changed the air filter on this mower, but I've never messed with fuel-y bits other than to refill the tank.

I came home from a walk this afternoon to find a squirrel in my basement -- thrashing and crashing around and obviously wishing he was not in the basement. On this we agreed, I did not want him in my basement either. We differed a bit on how he was going to leave, but the back door is open. I visited him in the laundry room, and left to close off as much of the rest of the house as I could. Now there is no sign of him. Here's hoping he left (though I actually don't have much hope on that front, I suspect he is just scared shitless and holed up somewhere down there). Anyone have a have-a-heart trap in a squirrel size?

Anyway, since it seemed like we might be spending a little time together, I named him Frank. Why a male name? I dunno... its spring. Maybe his testosterone addled brain convinced him that coming into my house would be a good idea. As I was reminded of last night, the desire to get laid makes some males do really stoopid things. 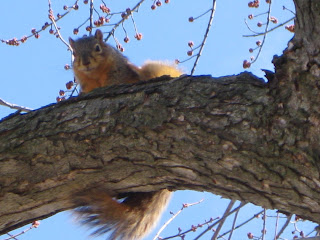 ****Update**** I barricaded what I could and left the back door wide open, while I sat down to quietly do some work. After a while, I heard some rustling at the back of the house, snuck through the kitchen and found a squirrel just past the back step. Was it Frank leaving my house? It had to be. I had a little chat with him about not doing this again while he chattered at me from the tree.
Posted by Zoe the Wonder Dog at Wednesday, March 11, 2009 6 comments:

I spent a rare few minutes in the student-dominated world of the University Center yesterday evening. I needed food, had only a few minutes, grabbed a sandwich, and plunked down in a heavily populated section of the tables. A gaggle of young women with one young man in tow (literally, they were pulling him along) descended on the tables around me. It was like a car crash. I couldn't not look. Here is what I learned:

-current fashion trends dictate that one should coordinate one's bustier with one's shoes.

-"laying out" to get a sun "tan" (though really it was a burn) is a popular activity in March in Michigan.

-if the guy you are crushing on comes into the building unexpectedly, you should dive under the nearest table, lest he see he when you are not "ready"

-the phrase "that's so gay" is still used by some twenty-somethings.
Posted by Zoe the Wonder Dog at Tuesday, March 10, 2009 No comments: 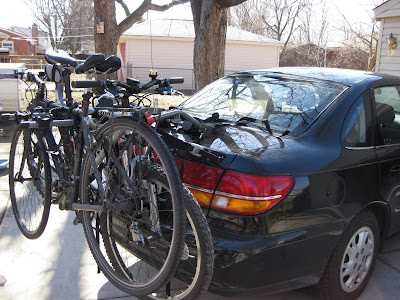 I am not an epic rider, nor am I a racer. But I like to ride and I'd like to ride further. And I'd love to ride on something like this.... 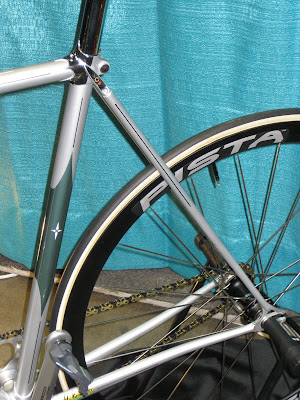 I've ridden a couple of carbon bikes. I see them out there in the world. But they do not make my heart sing. I do not imagine myself riding them.

Nope, for me, it is the cleaner, old school lines of steel that pull me in. I went in liking lugged, but seeing some brazed frames up close and naked of paint... well, sure, I could go that way too.

So, yes, I spent a few hours at the North American Handmade Bicycle Show this weekend. And here are some things I loved. Ziiiiiing! 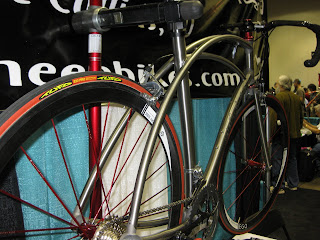 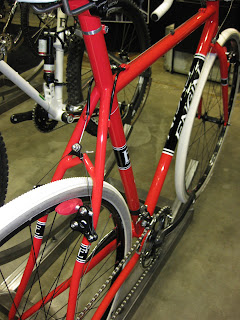 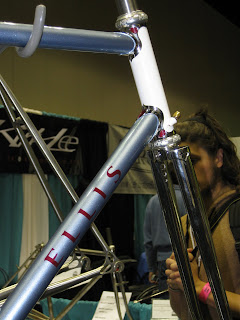 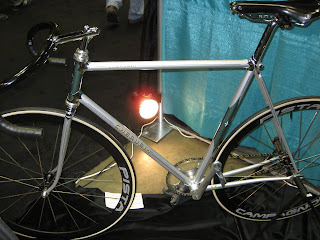 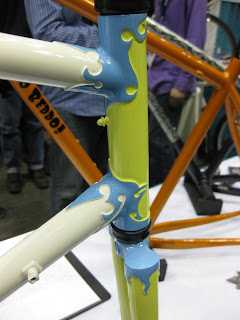 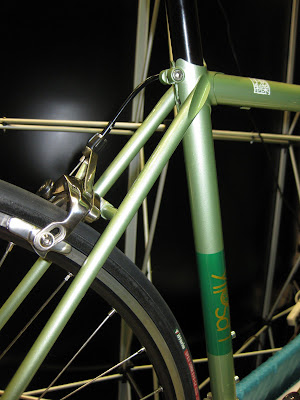 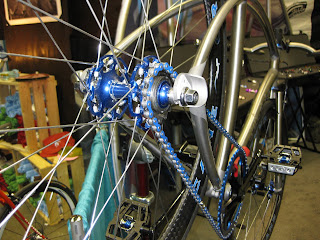 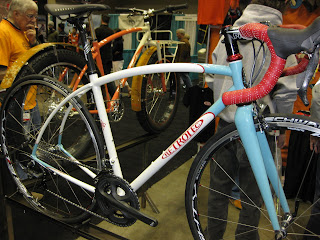