Most of the magic circle seemed to be heading for the Friday night run of the 13th annual Summer Beer Festival. Never one to be left out, I snatched up Stacey's extra ticket and then procured a couple more for my dad and brother.

I usually can come up with a little something to write about the beers I taste, but I'm working from a deficit this year. In case you weren't in the area to experience it up close and personal, it stormed like mad for a good part of the evening. Things started out well enough. We had a table under a tree. Everyone assembled and we commenced to taste -- and I took notes. Then the clouds started churning and we headed for cover under the nearest beer tent where we stayed while the clouds spilled and lit up with lightening. While there was some shelter, beer, and good company, there was not enough dryness to take notes. So I just drank. Then I wobbled home. Then I wondered how I'd managed to get so drunk...

Anyway, here's all I have to report on this year:

The sour trend seems to be under control (finally). There were plenty, if that is your thing, but they were no longer hogging the show. Similarly, the fruit beer thing also seemed reasonable.

A new trend, and one that I enjoyed, was the dark IPA. Most lacked the depth of a traditional American-hopped IPA that I love -- the stink, the beginning, the shift in the middle, and then the left turn at the end -- but the maltiness they brought to hops was not unpleasant. I liked Arcadia's B. Craft Double Dark IPA the best, as it was the only one that had an IPA smell.

Ginger beers made a good show. I'd liked Original Gravity's in the past but it was weak this year. The winner in this category came from the Hideout Brewery in Grand Rapids: Ginger Lee Ginger Pilsner -- very fresh ginger juice taste to it.

The competition for silly, clever, and saucy names was fierce again this year. Right Brain always does well in this category (Distill My Heart Bourbon Stout). Arbor Brewing had Uskratch Mai Bock. You get the idea.

My best beer conversation came with the Short's folks (that's two years running!). I'd had much beer by the time I closed out the festival with them, but the Hangin' Frank was good -- lovely, stinky IPA -- and the people who pour that beer know how it is made and are enthusiastic about it! I need to get up that way for a visit at some point.

And now, what you have all been waiting for, the worst beer of the evening? That would be Bell's Brewery's The Wild One. I went for a Rye Stout (they were out) and the guy tried to sell me on this. I resisted and had the Batch 9000 but they did talk my dad into it. It was evil sour -- not beer sour, but "something is wrong with this" sour. It was so bad that I begged a pretzel off a pretzel-necklace-wearin' dude in a desperate attempt to get rid of the taste. If you think it isn't fair for me to pick a beer as the worst of the night when it is a style I don't like, then I'll have to go with the 9000 -- I poured it out and had a laugh when the random guy next to me did the same. Whichever beer "wins" this category, Bell's was the loser on Friday!
Posted by Zoe the Wonder Dog at Wednesday, July 28, 2010 No comments: 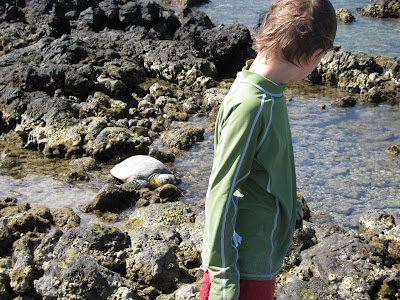 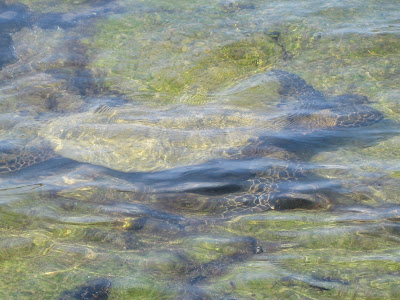 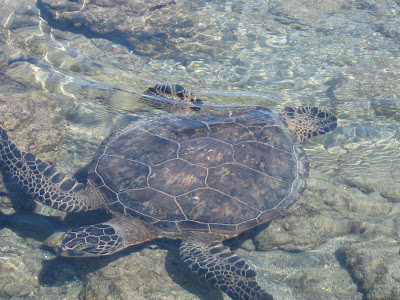 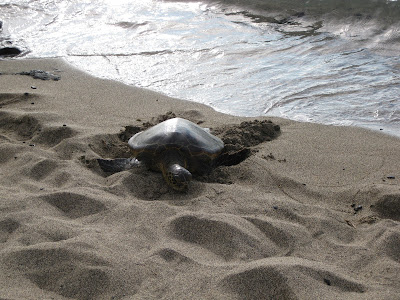 Sure, beaches are grand, but I love to peer into the pools made by craggy lava rocks to see what's living there. On our first full day, O and I scrambled up some rocks at the end of Mauna Kea beach to explore and we found the first of many sea turtles. I never saw any turtles when we lived there in the '90s. My dad saw one while snorkeling when he came to visit and I was so jealous. I saw only one on our last visit -- swimming along at Hapuna and I followed it - with O in my arms -- along most of beach. This time, however, I saw turtles everywhere. I lost count after a while, but definitely encountered more than two dozen -- some on the beach and some while snorkeling. Amazing creatures...
Posted by Zoe the Wonder Dog at Wednesday, July 28, 2010 No comments:

We stayed along the Kohala (northwestern) coast of Hawaii which put us within striking distance of the best beaches on the island. Beaches such as these... 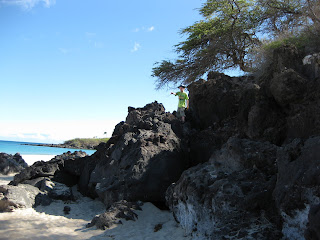 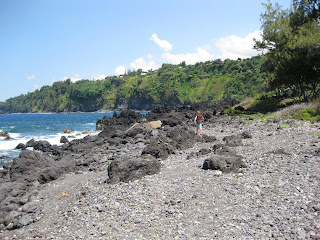 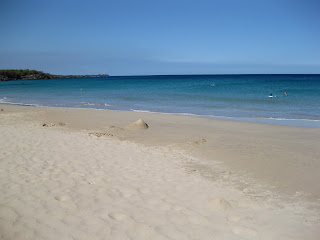 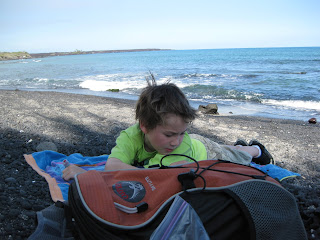 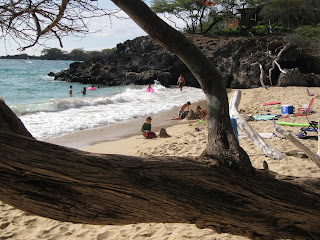 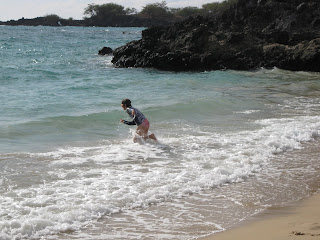 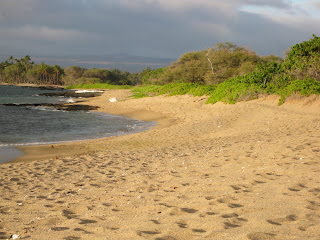 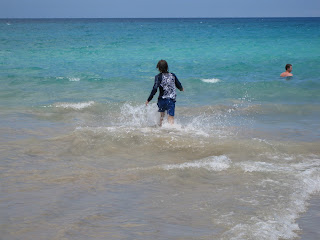 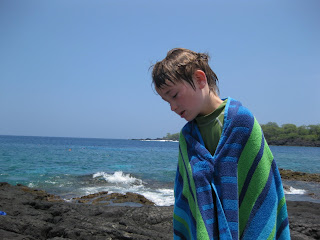 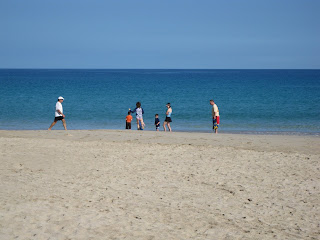 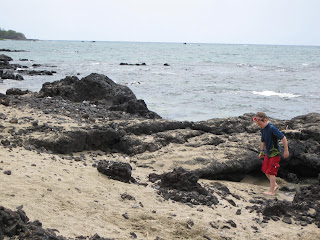 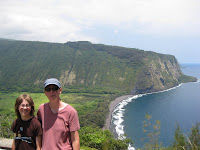 So...I went to Hawaii. Upon return, people politely ask, "How was Hawaii?" and I stumble over an answer. After some contemplation, I've decided that this is for two (related) reasons:

1. Hawaii is a spectacularly beautiful place, but it is a place with which I am quite familiar. I lived there for a short while in '92-'93 and I've been back to visit a few times. I can't recapture the wonder of seeing how blue the ocean is, how black and huge the lava fields, how lush and green the valley's of wet side are. I know they are fantastic sights, but they are too familiar to move me to any aggressive use of adjectives...

2. This visit meant that I spent two weeks visiting my former life. I lived in Hawaii 18 years ago. Hard to believe 18 years has passed, but I don't regret that time. Being in that place again and sharing space with the person I shared space with then... well, it put me just a touch off balance, but not much. I'm not particularly sentimental and this trip reminded me of that. I could ponder where the time went, but it didn't send me into waves of nostalgia. It just seemed (again) very familiar.

"How was your trip?"

Dusting off the old blog...

My goodness, the neglect around here! Piles of dust everywhere! Yeesh, one might conclude that I have done nothing, have no opinions about what anyone else has done, and have no plans for the future. But that is not the case...
Posted by Zoe the Wonder Dog at Wednesday, July 28, 2010 2 comments: