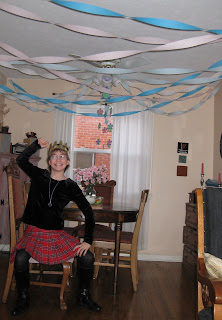 Here she is... the birthday girl. 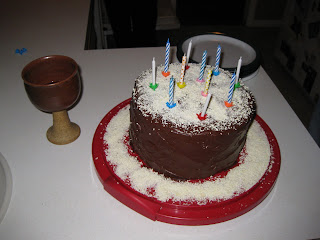 I made her a cake: triple layer chocolate with a dusting of white chocolate "snow" 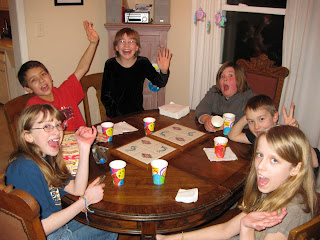 A few of her friends came for a sleepover. 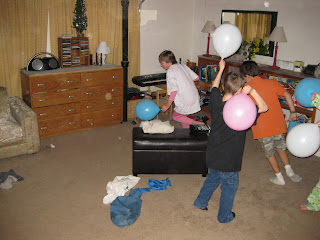 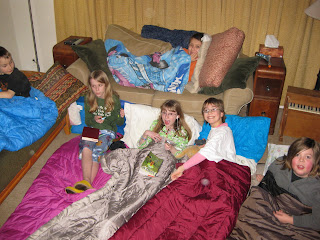 Posted by Zoe the Wonder Dog at Saturday, January 16, 2010 No comments:

We Don't Need No Stinkin' RB! 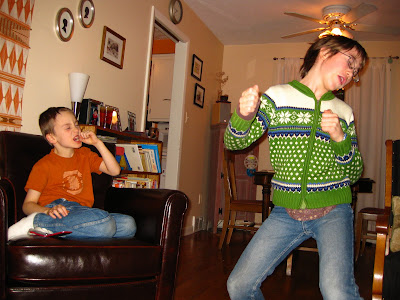 A little levity... much needed after that last post, eh? Here are my kids, rocking out -- E on air drums, O singing -- to Pennywise's My Own Way, being played on... my phone (see it there on the chair with O?). Yeah, we don't need no R*ck B*nd around here! 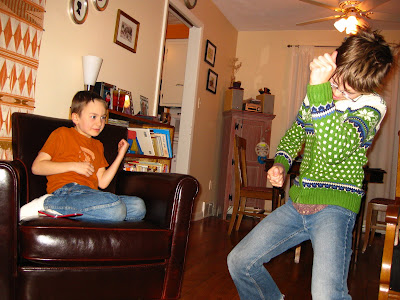 Once again today, I ran up against the misguided image people have of me and my blood is boiling. What makes this so infuriating is not so much that the image is wrong -- how well can I expect people to understand my interior anyway -- but that people deploy it as if it is a "cute" little quirk of my personality. Except that what they are implying is not cute. To suggest that I'm some sort of overachiever, who doesn't know her own limits, who can't control her energy, who never listens to advice that advocates patience is just insulting. And I'm at a loss as to how people can't see that.

As anyone who has ever ridden a mountain bike or served on a panel with me knows, I do know and (and sometimes overly-) respect my limits. High energy does not mean recklessness. Independence is not just knee-jerk stubbornness. To make these traits into the defining characteristics of my personality, is to question my rationality. And it is not cute.
Posted by Zoe the Wonder Dog at Tuesday, January 12, 2010 2 comments:

Labels: rants, the annoying outside world

With my current recovery downtime, I'm spending lots of time reading and getting some knitting done. The kids both want fingerless gloves like the ones I'm finishing up for myself. I also made a pair for the girl child's doll (E turns 11 soon -- I'll actually have a project done before the day!). I think I'll make a caplet for the doll as well, and use up some of the yarn that is taking up space under my bed. A cousin having a baby in a few months might also get something handmade. Anyone have a great, easy baby pattern that uses washable sock wool? I have tons of pretty stripey stuff I bought to make baby sweaters with, but the sweaters seemed more than I could get knit up with this tiny yarn...

Anyway, I'll be struggling to jump into an academic term that is well underway later in January, but, for now, I'm taking it easy and maybe getting a bit of the vacation I missed with the pre-surgery pain.

I will be going stir crazy soon, though, so keep me in mind if you are headed somewhere interesting in the next week or two... I can't drive, but I'm sure I'll be up for going out soon!
Posted by Zoe the Wonder Dog at Sunday, January 10, 2010 No comments: 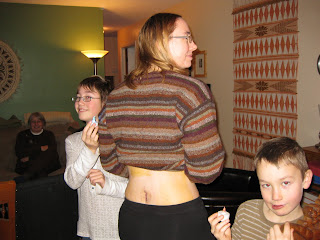 So coming out of the surgery, I keep finding new "things" on my body that I hadn't expected. I realize that I just went through fairly significant surgery, but these surprises have me wondering just how complicated this surgery got and when. Did the doctor leave out many parts of the surgery when he described it to me beforehand or did he have to adjust quite a bit once he had me on the table? Were there more questions I should have asked?

When I woke up, I immediately realized I'd been catheterized. This was very uncomfortable but the nurse explained that the surgery had gone over 5 hours (doc and I had talked about a 2-3 hour surgery), so it was needed.

Next up was the realization that I had a second IV. The nurses disconnected this "large" (nurses description) IV from the drip but left it in "just in case."

I found all these small punctures in the palms of my hands on my wrists. No one had an explanation for them until the next day when someone finally suggested it was where they had run some EMG lines to test my nerves during surgery.

During the evening, the tops of my thighs went numb, especially on my right leg. This was profoundly disorienting since numbness had sent me to docs in the first place, but this was a NEW numbness, and coming off of just having had spine surgery was scary. The docs sort of shrugged this one off, saying I'd been on my belly in one position for a long time and that probably did it. I've waited this out, and it has gone away.

The skin over my hip bones, especially on the right, was irritated, red, raw... another side effect of being draped over pillows and foam blocks to extend my spine on the table, I guess.

Later, in the middle of the night, after I'd been admitted to the hospital, I found all these dried bloody patches in my hair. The nurse shrugged on this one but finally suggested my head had been screwed into a halo during the surgery. Again, news to me.

When the nurse went to remove my IVs so I could come home, we found a second line had been put into my left hand, at the wrist. (That made for a total of 3!).

When I came home, the irritated spot on my right hip turned out to have some sort of filament or splinter in it -- no wonder it was so angry. What had I been dragged across when I was knocked out?

And then last night, I came up from the dark basement where I'd been watching a movie with the kids to find my left hand (in the thumb area) and wrist heavily bruised -- when they hadn't been 2 hours before. This is where that 3rd IV had been hiding. IV site #2 is also a bit bruised all of the sudden.

This is not any sort of interesting post, but I wanted to set down for myself this series of unexpected bits. I hope they are done. I'm ready to scale down the meds (steroids, nerve calming agents, antibiotics, etc.) and stop finding new, strange things that have been done to my body. I'm ready to heal.
Posted by Zoe the Wonder Dog at Sunday, January 10, 2010 4 comments:

For the first time in probably a month, maybe two, I am typing at my computer while sitting down. The surgery on Jan 6 was long and involved -- some bone in my spine was shave back (L4), a cyst was drained, and then all of that cystic tumor that could be removed without doing damage to my nerve was scraped away. My incision hurts. A 3-4 inch line down my spine, sealed shut with a couple dozen staples is hurting right now, but the searing, burning pain that had taken permanent root in my lower right leg is completely gone and while my right big toe is still a bit numb, I know it is there. As the swelling goes down, it should get better. I can lay on my right side. I am not leaping out of bed in pain shooting from my right hip down to the tip of my toe.

Now I must be patient and give my body weeks to heal. The narcotic haze helps the incision pain but also makes my fingers and my tongue stumble, but I'm so relieved -- almost scary relieved -- that the surgery seems to have worked. The pain was beyond what I had endured with the hip and I don't really have the words to describe the terror it brought to me as it got worse and got worse so quickly.

But now, now I can actually contemplate adventures to come. A trip to the desert. A trip to Hawaii. Sleeping 7 hours in a row.
Posted by Zoe the Wonder Dog at Saturday, January 09, 2010 No comments: