Yes, yes, I'm watching Olympics... and there are commercials.

I'm also reading blogs and snorting over the way a certain someone has managed to once again (though unintentionally, I suspect) mischaracterize my feminism. Oh wait, maybe I shouldn't write about that. He might want to beat me into suppression with his penis. No, maybe he will just oppress me with it. Jeez. I leave you with this.
Posted by Zoe the Wonder Dog at Wednesday, August 20, 2008 17 comments:

So.... some new folks moved in across the street. On the plus side, one of them is an 8-year old boy and my kids are delighted to have a new playmate. But the interactions I've had with mom have been nothing but strange and awkward.

The first time she tried to introduce herself was when I was sitting on the front porch, talking with a friend from Georgia who has gone through large life changes of late. I did need to finish up with this call, but there a lot of ground to cover. I tried to motion to the new neighbor that I was on the phone (I assumed it must not have been obvious or she wouldn't have approached me then) and would catch up with her when I was done. I'm not sure I was successful. By the time I got off the phone, she had wandered down the street out of sight.

Then last night, she came by while I had another friend over. I wouldn't have answered the door, except that I guessed that it was her kid who had buddied up to mine and was playing in the backyard. I thought she wanted him back and wanted to check in with me before heading back there. Well, no, she wanted to introduce herself. And I guess she wanted to chitchat, but serious awkwardness ensued because she answered all my questions with single words...

"Where did you come from?"

"So, is your son going to the local school in the fall?"

Okay, I give up. After all, I had abandoned my friend in the house... I made my 'gotta go' noises and scooted back in.

Then tonight, the kids are out playing while I am making dinner. I see that the new kid is over but all seem to be getting along well, so I let them be. Then I hear an adult talking... but it doesn't seem to be to the kids so I look around and find the neighbor mom has walked past the kids, up my driveway and is standing in my open garage talking on her cell phone while smoking a cigarette. Then she strolls down the driveway to chat with the kids. I can smell the smoke coming in the kitchen and dining room windows, so I pop outside. She is still on the phone. I say "Hi (note my pleasant greeting). Please don't smoke around my kids or my house."

She apologizes and scurries away so quickly that I don't think she heard me about not smoking around the house. Strange.

Then, later, while we are eating dinner and then every ten minutes afterward, the boy knocks loud and long on the door asking if O can come back out and play yet.

Yahoo won't let me into my yesterdaylooksgood e-mail account. I can log into my other one just fine. I've had this happen now and again, but it has never lasted 12 hours! It is driving me nuts (of course) because I know from Messenger that I have two new e-mails in there. Anyway, if one of those e-mails was from you, you'd better call, I guess.
Posted by Zoe the Wonder Dog at Tuesday, August 19, 2008 5 comments: 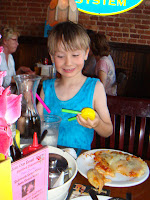 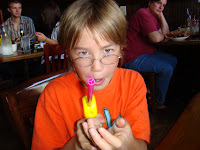 Caught a bit of the Heritage Festival on Friday night. We started with dinner (and beers, of course) at Sidetrack and then had a mellow amble through the happenings.

Saturday morning we paraded with 'Local Motion' -- a combo of Bike Ypsi, Ypsi Food Coop, Growing Hope and a local farmer. Pete, the farmer, brought along a trailer with goats and chickens in it and other folks had some rabbits in cages on wagons. Best part? We were behind the Willow Run High School band (and not some singing-to-canned-music-Christians on a float -- whew). The route was short, which was probably best as riding at 2mph is, um, hard. It is extra hard when you have an impatient 6 year old on a trail-a-bike attached you. 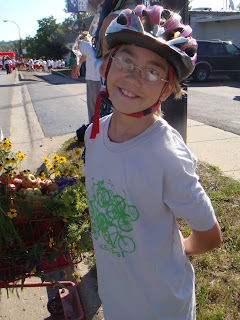 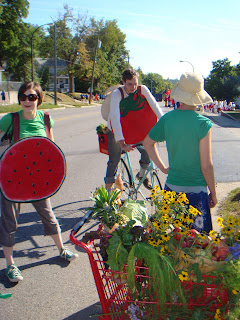 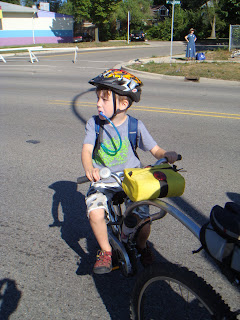 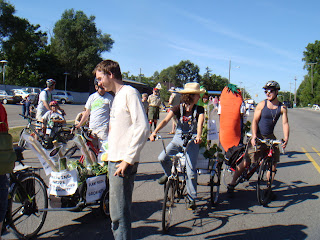 After an afternoon spent recovering from the parade at home, the kids and I set out for the festival again. We got ice cream at Luwak and watched the robots for a while. The high schoolers even let O drive one for a bit and both had fun being chased around the parking lot by a robot with a pizza box body (and it was made with an Aubrey's box, even!). A kind friend brought me a beer to help sustain me through the hour we volunteered to work the bike valet booth -- something the kids did not want to do. We talked about pitching in and keeping commitments and all survived. That left only eating sandwiches and grooving to Hullabaloo to round out the evening.
Posted by Zoe the Wonder Dog at Monday, August 18, 2008 5 comments:

A couple of weeks ago, I went to a SEMCOG public forum on regional transportation issues. They held three of these around Southeast Michigan. I attended a session at Washtenaw Community College.

The results of the public forums have just been posted. You can read the full results of the survey done with forum attendees and see how we doled out the 100 SEMCOG "bucks" the presenters gave us to spend, if you are so inclined, but I can tell you [Spoiler alert] most people think our public transit system in the region is inadequate and more money should be spent on it. Astounding, eh?

I found the meeting to be disappointing overall. It didn't have much depth to it and it was hard to not snicker at hard-hitting polling items designed to gauge our level of agreement with statements such as this: "The region's transportation system has an impact on the region's economy."

Sniping aside, here are a few important points that did emerge from the meeting: First, "non-motorized transportation" is an awkward/inadequate category (one of six that SEMCOG focuses on). As one who frequently uses a bike as transportation, I found that lumping biking and walking together tended to pull the discussion in the "recreation" direction and away from "transportation." The focus then becomes more on expensive-to-build paved paths ($300,000/mile... just for comparison, it might be helpful to know that a 2-lane road only costs $950,000/mile!) and less on bike routes/lanes, sensors at lights that can detect bikes, and other fixes that would promote transportation/commuting by bike. Bike lanes are cheaper than paths and have more in common with other SEMCOG categories (such as "pavement" and "bridges"), but being lumped in with non-motorized seems to make these connections secondary.

The SEMCOG representative with whom I spoke about non-motorized transportation confirmed that this is, more than any of the other categories, the most intensely local issue. In other words, planning for regional non-motorized transportation has been quite difficult and, in some cases, is a non-starter. Considering that, those of us interested in such issues and interested in shaping the planning in this area, need to be working on the county, city, and township level. SEMCOG's planning for Direction2035 (the regional plan they are now developing) will move to this level during the winter (Nov.-March) and those are meetings -- with both regional and local officials -- that we will want to be attending.

Second, the regional rail project between Ann Arbor and Detroit is moving ahead. There was some big grant that was going to launch this initiative in style, but it didn't come through. Instead, a shoe-string budget, some heavy negotiation, and probably some political slight of hand is going to produce a much more modest system to be up and running by 2010. I'm stupidly excited about this. I don't care if it's third-hand rolling stock and passengers have to use an old loading dock as a station platform -- being able to train to Dearborn for my work would be gorgeous... half an hour to doze or read instead of drive. Oh yes, please.
Posted by Zoe the Wonder Dog at Friday, August 08, 2008 6 comments:

Dead opossum in the middle of the road.

Car passes me, hits the opossum.

Dead opossum tossed up in the air behind the car.

Lands with a splat next to me.

Eew. Were those sprinkles I felt on my leg on this moist morning or opossum guts?
Posted by Zoe the Wonder Dog at Tuesday, August 05, 2008 3 comments: