What I Want (right now)

Okay, really it should be "cluck-cluck" sex, right? But the topic remains: how do chickens have sex?

All of this was brought about by Gertrude's recent move into chicken adulthood and my kids' assumption that there would be baby chicks running around at our next visit to Belly Acres. I told them, no, these were unfertilized eggs, like the kind we eat. O then asked, as he should, well, "how do they get fertilized?" "Uh... chicken sex," I say with enough confidence that I hoped he would take the answer and move on. He did, but it'll come back around so off we go to internet for help...

And there I learned that domestic fowl don't have penises, but they do have testicles. The chickens put their cloaca's up against each other and the female sort of "captures" the sperm and pulls it into her body where it can be stored and used as necessary to fertilize a whole clutch of eggs that are actually produced and laid one at a time (usually once a day) for 7-10 days. Constructing each egg is pretty intricate and starts with the ovum, around which is constructed the yolk, and then most of the other bits are added on in the uterus and finally there is some speculation that the color is added to the shell in the vagina shortly before laying.

(in my two second search I couldn't find any good images, but here is a completely silly South Park scene that involves chicken sex to distract you...)

The next question in the "how do they do it?" topic thread pertained to my composting worms (I have plenty, btw, if anyone is looking to start a bin in their own kitchen). How do worms reproduce? Well, this is pretty cool, cooler than the chickens, I think. Certainly cooler than you and me. 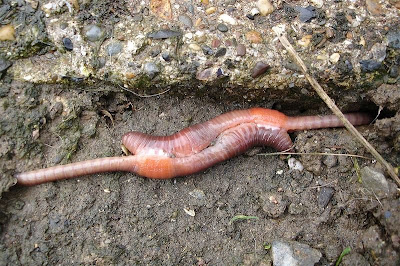 Actually, I don't know how to do this, but I seem to be trying to figure it out. Wednesdays between 2:15 and 3:45pm, I write. Then I stop, sit on it for a week, and then try to get the groove going again a week later.

I shouldn't complain too much. I did some good stuff today. I almost have enough to send off a chunk to my writing group. I'm on deck for discussion next week, so I have to get them something... and soon. Couldn't I have just one more block of time?
Posted by Zoe the Wonder Dog at Wednesday, February 11, 2009 No comments:

Tonight we went to the middle schools' open house. It was a sort of odd mixture of "get excited, kids" and "don't worry, parents." I'm really not sure what to make of it all, especially as my brain tries desperately to keep my own memories of what we called "junior high" suppressed.

As we walked through the school on our way to the program, we passed these giant adolescents -- I knew E would look small against an 8th grader as she is younger and slight -- but these kids were adult sized and shaped. Could 8th graders really be that big? Well, as it turns out, those were high school kids. Whew.

After all the speechifying and after watching E's excitement when the curriculum director promised double math classes (she is loving math these days) and promotion to more advanced classes based on ability and not age/grade, I really started to feel excited for E.

But then, we walked around the school a bit and W directed my attention to the display put out by the school's wellness center touting its good work in the school: images of middle schoolers had little dialogue bubbles popping out of their mouths saying things such as "I hardly think about suicide at all anymore," "I've learned to always use protection," and "I feel so much better now that I've lost weight and stopped smoking."

I'm sitting on the couch, drinking coffee, tying to recover from last night. I didn't stay out too late. I didn't drink too much. All I did was breathe... at the Elbow Room. And that means I was breathing in lots of other people's smoke. Hack. Cough. Cough.

I love live music, but I can't stand it that so much of the local and affordable opportunities for this are tied to the last remaining public spaces where people can smoke. Maybe it is because there are so few other social places to smoke... and then there is the music and the drinking... but ack, I feel like I have to steel myself to go out anymore and friends of mine won't come out at all because of it. And, of course, it is dangerous. None of this is new or news to any of you. But this morning I took some time to write some letters. You can too. The bill has gotten close. The governor supports it. It is time.
Posted by Zoe the Wonder Dog at Sunday, February 08, 2009 1 comment: