Dispatches from the Bar

I've been at the hipster haven known as Woodruff's the last couple of nights for Mittenfest VI and I thought I'd report on two items of amusement:

1. Silly facial hair and kids who don't dance abound at this place. And in this land of vans and skinny jeans, I heard one guy actually say to his friends, "Don't you see him over there? He's the guy in plaid." It was just too much like trying to find somebody at a Dead show in a tie-dye to not get a good giggle out of it.

2. Then last night, I noticed that the guy holding up the wall next to Biscodo was not looking too hot, even though he continued to pull on his PBR. I couldn't tell if he was on the verge of an emotional or phsyical breakdown, but he was definitely not well. I nudged Dr. Friendly, who had joined our party, but he declared that we did not need to intervene until (if) the guy hit the floor. I was considering getting the dude a glass of water and encouraging him to lay off the beer but his friend appeared and seemed to talk him back into some less pained state so I let it go. Five minutes later, when the bands were changing over and Biscodo and Dr. Friendly had toddled off to the bar, this guy, apparently feeling very much better, started to chat me up.... as if nothing had happened. Okay.... I can play along:

"Yeah... well that's really my name and now I'm really going to go talk to someone else" (Thanks for being near by, Matt!)

Yeesh. Dude, lay off the... whatever the hell it was you were on last night.
Posted by Zoe the Wonder Dog at Saturday, December 31, 2011 No comments:

The Power of Polo

A couple of weeks ago, I popped into a local restaurant to pick up my pizza. I slid up to the bar to claim my pie and found myself standing over the shoulder of man who was perched on one of the stools. I caught a whiff of his cologne. He smelled like my high school boyfriend. And that was pleasant. I let my nose float me back to the age of 16. Wanting to enjoy the sensation, I intentionally didn't let my gaze fall on the man sitting near me -- his physical form would most certainly ruin the wave of nostaglia since it would be unlikely that it was a 6'2" teenage boy with shiny brown hair and a hint of freckles sitting on that stool, or even anyone close to the handsome man that boy became ... I couldn't tune out the stranger's voice entirely, however, despite trying, and I heard him say to his buddy, "No, they're not asians, they're orientals..." Poof, wistful rememberances disappeared and I grabbed my pizza and fled.
Posted by Zoe the Wonder Dog at Saturday, December 31, 2011 No comments: 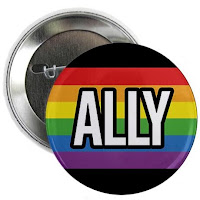 On my last flight, I slogged my way to the way back of the plane and hopped over a super cute dyke to claim my window seat. As I was shuffling in, she said, "thank you."

She pointed at the "ally" button on the bag and said, sincerely, "thank you for that."

I was surprised -- never having had anyone comment on it before. Then, I stumbled over an answer as I overthought just what it was that this button says about who I am. Saying "you're welcome" seemed so weird...as if I believed I was wearing that button as some sort of act of benevolence toward others rather than as a statement about how I believe the world should work.

I finally did mumble out something. That out of the way, I found I really wanted to ask her how it felt to be on that plane, amongst a sea of people (including my own Eddie Bauer-style self), who suddenly (to me, anyway) looked profoundly str8. I wanted to ask her if she always mentioned it when she saw ally support. I wanted to know what she really thought of the button and if she carried any of the same conflictedness I did... To me, she was the most interesting looking person around, but then the holder of the middle seat plopped down between us and all discussion stopped.

Meeting New People... Or Not.

I’ve gotten to a certain age where I’m a bit more set in my ways then is probably good for me. This means that whole groups of people are likely to be eliminated as potential friends right off the bat. You’re not very political? You smoke? You’re churchy? You hate cities? You drink cheap, yellow beer? You never went to college and, frankly, don’t see the point? You wear black socks with shorts? You love amusement parks? You would never go camping where there weren’t flush toilets available? Well, then, really, what’s the point? I know the folly of this way of thinking. I know that there are at least a few of you who would answer “yes” to some of these questions, yet we are friends. A couple of us are even close friends. You snuck through, apparently bringing with you enough other fine qualities to balance these black marks on your record or worming your way in before my thinking became so rigid. So, if you turned out to be okay, couldn’t others who presented, at least upon first glance, as not-a-chancers? Sigh. Unless I reform my evil ways, we will never know.

But you people have a role in this, too. As I sat in the bar the other night, chatting with someone who was an agreeable sort, the right (enough) age, and drinking good beer, I found myself writing this person off because of what you, my already-established, dear-to-me (yet somewhat flawed) social circle would think. Oh, not like you would tell me this person was inappropriate (see qualifying factors named above) or evil, but there was a style choice in the personal appearance of this candidate that would not have escaped notice, comment, and probably some mild ridicule. In other words, there are now too many voices in my head (mine and yours) telling me to not even bother. If I never make a new friend again, I’m blaming you, okay?
Posted by Zoe the Wonder Dog at Tuesday, December 20, 2011 1 comment: